I have fond memories of my introduction to pulled pork barbecue – at a friend’s home just months after beginning college.  Before making the trek south to go to Clemson, the word barbecue was a fairly ambiguous part of my vocabulary – we applied it to virtually any party where the cooking took place outdoors.  The meal itself had little to do with the label.

It didn’t take long to learn that “barbecue” means something different – something specific – in the Southland.  It is a term applied to varieties of smoked meat, and often specifically pulled (or chopped) pork.  If you invite someone from the South to a “barbecue” and serve hamburgers and hot dogs, you should be prepared for dismay (and disappointment).

Having lived down South for a decade now, I’ve had the opportunity and the pleasure to try some pretty outstanding barbecue, home cooked and in restaurants.  As anyone who’s had really great barbecue can attest, the memory of that flavor stays with you – it’s sinfully good with flashes of heat and sweetness, and not too bad for you (until you add the bread, hush puppies, and mac ‘n’ cheese – but what would good ‘cue be without these sides?).  Specific culinary experiences come to mind when I think of barbecue.  For example, truly outstanding ribs served in the Blues City Cafe in Memphis, Tennessee.  A juicy, flavorful pulled pork sandwich at Lexington Barbecue in North Carolina.  And one very memorable beef brisket – at Salvage BBQ in Portland, Maine.

Maine, you ask?  Yes, indeed. When Salvage BBQ burst onto the Portland dining scene about a year and a half ago, the buzz was big.  From my perspective, they drove an effective social media campaign that leveraged the existing foodie culture and awareness in Portland, and most importantly of all – they were differentiated.  Salvage BBQ was offering something to the area that was new – no white tablecloths and perfectly seared scallops – but scarred wooden tables and meat you can (mostly) eat with your fingers.

The atmosphere is reflective of barbecue places down South  – perhaps unsurprising as the owners journeyed through North Carolina and Texas in search of inspiration before returning home to bring the goodness of barbecue to Maine (http://www.salvagebbq.com/). They are a self-service style restaurant, very common down South, where you order at the counter and the food is brought to you at your table (or you can sit and order at the bar).  This is a place where families can come to relax with minimal worry about their children breaking anything or bothering anyone, given that it’s typically already quite noisy and very casual; or where friends can gather to grab a beer, share a meal, and listen to regular live music acts. 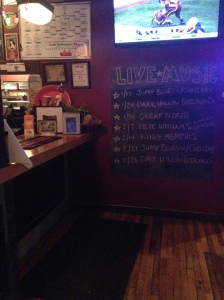 And then there’s the food.  When we went, I wanted to try a little bit of everything, so we ordered the “Meat Coma” (yes, that’s really what it’s called), which includes a 1/4 rack of pork ribs, 1/3 lb. brisket and chopped pork, and a cup of chili.  Don’t worry, big eaters – there is also the “Meat Fatality” if that’s not enough for you.  They offer multiple barbecue sauces on each table – a more traditional barbecue sauce and a thinner, vinegar-based barbecue sauce that’s very popular in the Carolinas.

I have nothing but good things to say about the food.  I’ve already mentioned the brisket, which I could frankly wax poetic about.  It is head and shoulders above any other brisket I’ve eaten at a restaurant, and Nick and I enjoy smoking brisket at home, too.  We now have new aspirations for our next smoking venture!  Moving on to the other meats: while I prefer beef ribs to pork, the ribs were exceptional in flavor and texture, and the chopped pork rivaled any you’d find in the Carolinas (the vinegar-based sauce is a must-try, everyone).  Candidly, I don’t believe we had a single green veggie on our plate, as our sides were potato wedges, mac and cheese, and hush puppies.  My mom really loves those hush puppies, and for my weakness, the potato wedges were deliciously, fabulously salty.  What could be better?

If you haven’t visited already (and you’re not a vegetarian), what are you waiting for?  The barbecue is really something special at Salvage, and once you’ve factored in the appealing, rustic design and the low-key (but high quality) atmosphere, this is a dining win.

And in the end, our meal lived up to its name – we were all in a coma – and in bed, very early that night!

In honor of the start of summer in Maine (and in acknowledgement of the fact that it’s felt like summer in Georgia for about a month), I whipped out my Maine Summers Cookbook and began my search for the right recipe.

When I stumbled across “Pulled barbecued chicken with vidalia onions,” I knew it was the winner.  We’d recently been treated to a delicious, slow cooker version of pulled barbecue chicken while at a friend’s home over Mother’s Day weekend.  I hope to get a copy of their recipe, as well, but was thrilled to stumble across one of my own.  In addition, the vidalia onions honor our new Georgia home (check out Vidalia, GA, “The Sweet Onion City”).

You could easily transfer this recipe to a slow cooker, I believe.  It takes about 6 hours in an oven heated at approximately 250 degrees.  The recipe below serves 8 – I made a smaller version, between 1/3 to 1/2, but wasn’t precise enough with my measurements to share it.  The good news is, even if you don’t have the balance of ingredients exactly right, it still tastes great!

Put a lid on the Dutch oven and bake in the center at very low heat for 6 hours (I reduced the heat to about 200, 225 at this point).  Check the chicken for doneness – it should be falling apart.  Pull the chicken pieces to shreds using two forks until all meat is torn apart. 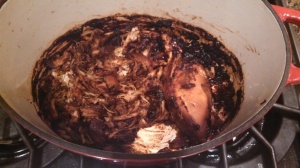 Partially pulled! Be aware, the sauce starts off red and liquidy – it boils down to this nice, dark, barbecue sauce look.

Recommended serving is with warm roles and cole slaw.  I had the initial taste last night, while my husband attended a work dinner, and skipped the side dishes entirely. 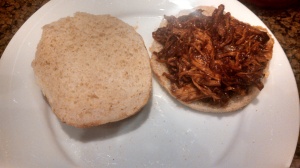 Tonight, we’ll have the rest, and I plan to serve it with green beans and Ben’s Peppery Potato Wedges – another great recipe from the Maine Summers Cookbook.