Title for this post is courtesy of my husband… and you’ll see the ‘why’ momentarily!

On Saturday, we had a couple of friends (fellow Clemson alums) over to watch the Clemson / Wake Forest game, and in addition to chicken, potato salad, and green salad, I decided there could be no better time to break out my shiny new doughnut pan and my gluten free Cinnamon Sugar Doughnut mix (by Stonewall Kitchen, of course) for a yummy treat. 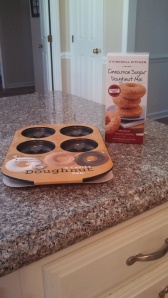 While I’m not attempting a gluten free diet, I know plenty of people who are – and I was pretty impressed by the array of gluten free foods offered by Stonewall Kitchen.  Stonewall Kitchen is a Maine-based company with a special story.  Founded by two friends, Jim Stott and Jonathan King, their company ideals reflect the best of Maine – a strong sense of community, wholesomeness, and the unspoiled, natural beauty of the state (per Stonewall Kitchen website).  They got their start at a local farmers’ market in 1991, selling out on their very first day.  This initial indication certainly proved true – today, several expansions and moves later, Stonewall Kitchen serves 6,000 wholesale accounts, has 11 retail Company Stores, a Cooking School, and is regularly recognized for its outstanding specialty food products.  Check out their website and try something – I’m sure you won’t be disappointed!

Recently, I ordered this doughnut mix and the Carolina Rub for my husband, to bring a bit of Maine to his new passion for smoking.

The recipe is very straightforward – in addition to the mix, you need only milk, one egg, and 2/3 cup of unsalted butter (1/3 cup for the doughnut mix, 1/3 cup for the topping).

Directions: Grease or spray a 12-well doughnut pan (I only had a six-well pan, luckily – as I got halfway through the recipe before realizing I’d… forgotten the milk.  That’s right, I managed to forget one of only three additional ingredients).  Preheat oven to 400 degrees.  Pour doughnut mix into a bowl, and add milk, egg (beaten), and 1/3 cup melted butter. 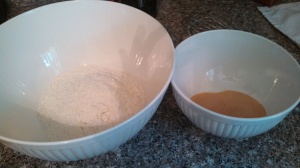 Beat on medium speed about 30 seconds to combine (I did this by hand – not so fun!) 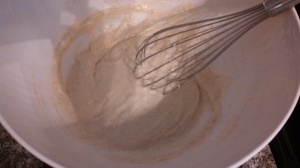 For the topping, pour the topping mix into a small bowl.  Melt the additional 1/3 cup butter in a separate bowl. 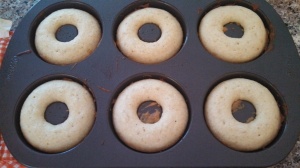 MUCH better! Milk… it does a doughnut good.

Remove doughnuts from the pan while still warm, and gently brush each with melted butter and then roll in cinnamon sugar mixture.  Serve immediately. 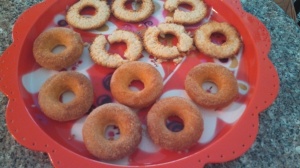 The doughnuts, and even the doughnookies (as we affectionately named my ‘whoops, no milk’ doughnuts) were a hit.  Between the four of us, they were gone by the end of the night, and my friend’s husband said he actually preferred the doughnookies.  Success all around!  Thank you, Stonewall Kitchen.