Today is a good day.  The New England Patriots won, and by a comfortable margin.  Like any good fan, my superstitions are now taking over.  As I contemplate the Sundays (and Mondays and Thursdays) to come, I’m giving serious consideration to wearing the exact same outfit, sitting in the same spot on the couch, drinking the same beer, and cooking the same meal.

Now, while I might like to mix up the outfit and viewing atmosphere, making the same meal wouldn’t be much of a hardship.  After all, who can complain about roasted brisket, jalapeno mac and cheese, and sweet potato wedges?  Although this isn’t a weekly recipe entry, I’ll point you to the recipes I used – both the husband and I agreed this entire meal was delicious (and except for the macaroni and cheese, it’s pretty good for you, too).

To begin at the beginning, Nick and I had been planning for most of the week to buy and smoke a brisket for our Sunday dinner.  It’s something we do from time to time, and more often during football season.  The side dishes remained a bit up in the air, but I picked up a few sweet potatoes at the Mulberry Street Farmers Market in Macon on Wednesday, and yesterday, I harvested a bunch of jalapenos and green peppers from our home garden.

Fresh from the garden!

While I don’t enjoy certain elements of home vegetable garden care (the pests, the constant weeding, etc.), I do love having one and the end result is worth the time and effort.  Given how strongly I remember resisting any type of work in our family garden as a child, I do find this somewhat ironic, but there it is.  It may have taken years to emerge, but those rural Maine roots have come through.

The dilemma really began as I took this image.  While I can pretty easily find uses for that many green peppers – there are an awful lot of ripe jalapenos, too.  Ultimately, I’ll be pickling most of them early this week, but I was also inspired to try a jalapeno mac and cheese.  Since it’s hard to go wrong with Martha, I used Martha Stewart’s recipe as a starting point and modified from there.  You can see the full recipe on her site at the link above, but here’s what I did differently:

Ready for the bread crumb topping…

This was really yummy, and the recipe made enough for me to freeze half for a future meal – and tonight’s half had leftovers.

This afternoon, we changed our brisket plan from using our smoker (outside) to an oven roast, inside, due to rain.  I did some internet searching and selected this Texas Oven-Roasted Beef Brisket recipe, but instead of making the rub with the ingredients they list, I used a rub we already had – happily, the Stonewall Kitchen Texas Rub.  Really good!  The brisket was tender and flavorful.

Having a home garden has taught me to think more about where my food comes from for many reasons.  Key among them is simply that the peppers and tomatoes I’ve grown taste better than anything from the grocery store.  The ‘why’ is simple: I’m eating them the day, or close to, I pick them – so they don’t have to travel for days or a week to reach me.  They ripen on the vine, increasing flavor and nutrients, and, best of all, I know exactly what they’ve been treated with and exposed to while growing.  There’s also satisfaction in eating something you grew yourself.  For all of these reasons, I also try to shop at local farmers’ markets as much as possible – it supports the local industry and it really is better for you.  I’ll follow this with a post soon on Maine farmers markets and on cookbooks that specialize in meals by the season.

Have a good week!

Truly, the title of this recipe says it all.  It just sounds exciting… not to mention intriguing.  What exactly makes it “party” chicken?  And, really, who doesn’t love a good party?

I suppose what makes this dish “party” chicken is simply that it’s one of those convenient-for-entertaining meals that slow cooks in the oven and comes out smelling spectacular.  It certainly feels like a perfect fall party dish.  Its meaty nature will make it a win with any man (Nick certainly enjoyed it), it’s easy with a short ingredient list, and the long, slow cooking makes it an ideal fall Sunday dinner (so as not to distract from watching football).  Although it’s still regularly 90+ degrees in Georgia, September calls to mind those first crisp, chilly days in Maine, and the rich, smoky flavor of this hearty meal complements the fall weather nicely (and would be excellent in winter, too).

I’ll admit – I was a little skeptical about how these ingredients would come together, but I shouldn’t have been.  This meal was really delicious, if not particularly healthy.  The recipe comes from a cookbook titled “Keep Cooking – The Maine Way” by Marjorie Standish, which I love because it’s a little bit old school and sometimes calls for ingredients I have to look up (or may vaguely recall from visits at my grandparents’ home).  It is a beautiful testament to the tradition of home cooking in Maine specifically.

Divide each chicken breast in half, giving you eight servings.  Wrap each half with a piece of bacon.  Using a buttered, shallow 9×13 baking pan, cover the bottom with thin slices of dried beef (I used beef jerky, which appeared to be dried beef or similar based on my google search).  Arrange the chicken breasts on the dried beef. 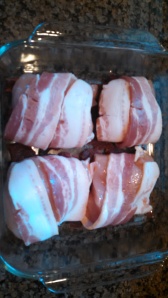 Mix the soup and sour cream, and spoon over all.  Cover pan and refrigerate for 24 hours.  (Please take note of this instruction, and that it takes three hours to bake.  I did not… and had to revise my meal plan for the week when I realized at 7pm on the night I planned to make this that I needed to plan ahead.) 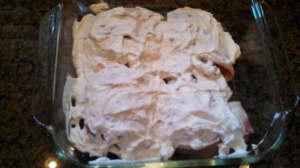 Smothered in sour cream and cream of mushroom soup…

The next day, bring to room temperature before placing in oven (I forgot to do this, and it still turned out well).  Bake uncovered at 275 degrees for 3 hours.

This recipe made our house smell delicious.  Our mouths were watering long before it was time to eat, and we weren’t disappointed when we did.

Yum! I served this with roasted potatoes and brussel sprouts, and the chicken nearly falls apart from the slow cooking.

On a follow up note, we had some leftovers (I love leftovers), and the following night, I made a chicken soup with them.  It really ended up being more of a “stoup,” with the sour cream and mushroom soup creating a thicker, creamier broth.  I threw in onion, potatoes, kale, and the chicken breast (with beef and bacon), diced up.  I added about a cup and a half of water, and the better part of a carton of chicken broth.  This was a great mix of flavors as well – hearty and smoky, not much like a typical chicken soup.

I was on the verge of beginning this post with, “My favorite season in Maine is fall..” when I realized that would be a lie.  Not because summer is my favorite… or winter… but because my favorite thing about the seasons in Maine is that I can’t choose just one.  I frequently reflect on how fortunate I was to grow up in a state with four distinct seasons and numerous opportunities to enjoy each one, indoors and out.

Although it’s only mid-August and there’s still a bit of summer (and Indian summer) to savor (“bit” being the operative word), now is the time to plan for your fall getaway in Maine or add activities and events to your calendar if you live there already.  Whether you’re looking to take in the radiant colors of Maine’s fall foliage, go for a hike in the crisp fall air, or participate in the revelry of one of fall’s many fairs and festivals, the opportunities are abundant.

High on my personal list are the Cumberland County Fair (September 21st – 27th), the Fryeburg Fair (September 28th – October 5th), and general outdoor activities like hiking or biking at Baxter State Park, Acadia National Park, or any of the other scenic locations Maine has to offer.

View of Mount Katahdin in fall.

A little research yielded some other interesting options for me to share with you:

International Seaplane Fly-In, Moosehead Lake, September 4th – 7th: Who wouldn’t want to visit beautiful Moosehead Lake in the early fall?  It is not only the largest lake in Maine, it’s the largest lake east of the Mississippi contained in one state.  This event consists of Float Plane Competitions, educational exhibits, and is the area’s largest craft fair.

13th Annual Fall Festival of Arts and Crafts, Smiling Hill Farm, Westbrook, September 6th: I have many, many childhood memories that involve Smiling Hill Farm – whether it was a visit to see the animals, an educational event, or enjoying their fresh milk and homemade ice cream – we visited regularly.  Attend this event (low cost – $2 per adult, children under 12 are free) and meet a number of artisans sharing their crafts.

Mt. Abram Ascent, Greenwood, ME, September 6th: This is a 5-mile run up the mountain – a part of the New England Trail Run Series – that will be followed by a celebration featuring an arts and crafts fair, mini-farmers market, and beer from Baxter Brewing Co.  I would be doing this in a heartbeat if I was in Maine!

The bottom line is – get out, get to Maine, and partake in this season of harvest and outdoor fun before the weather drives us inside to wait for spring (unless we exit the house armed with one or more of the following: shovel, snow shoes, skis, ice skates… you get the idea).