This weekend was an interesting, fun, and productive weekend for me – not just because the Clemson Tigers won (and are ranked #4!) and not just because the Patriots won (although not in the fashion I hoped they would) – but also because I made use of some things I had – and that was a great, fulfilling feeling.

I don’t like letting things go to waste (a refrain I am sure you’ve heard all too often on this blog), but I think being resourceful, making use of what you have, is fundamentally important to personal happiness on one level and to the world on another.

How is it fundamentally important to my personal happiness?  When I make use of things I already have – food, clothes, home furnishings, or anything at all – it typically saves money and is practical, which in turn enhances my sense of independence and self-sufficiency.  These feelings all contribute to making me happy.  I think it’s important to the world in the sense of conserving and using resources in a responsible manner – and no, that’s not a statement about climate change or global warming.  It should be simply common sense about what is good for all of us.

But I’ll stay off my soapbox and instead tell you what I made use of… a ton of basil, garlic, tomatoes, pine nuts, onion, and more.  You guessed it – I spent the weekend making tomato sauce, which I’ve frozen for use over the winter (or whenever I need it), and pesto, some of which is frozen and some refrigerated.

My herb garden was nearly synonymous with a weed garden before this weekend, with the basil and oregano growing wild, so I decided to pick up some tomatoes at the farmer’s market nearby and make homemade tomato sauce for future pasta nights.  This idea grew quickly into making homemade pesto as well, because I knew I had much, much more basil than I could possibly use in tomato sauce alone.

One of three bushels of washed basil occupying counter space…

Both are simple, and if you have an herb garden and/or vegetable garden, this is a great way to turn less-than-beautiful (but perfectly nutritious) tomatoes into a future meal and store all that glorious basil so you can make use of it when the fresh stuff isn’t growing right outside your door (not to mention, store-bought pesto is quite pricey).

For my tomato sauce, I began by cutting up one onion and dicing some fresh garlic.  In a large pot, I sauted the onion over medium high heat until translucent and added the garlic.  I had purchased between 15-20 tomatoes, and I cored and quartered them.  Some people like to peel and seed their tomatoes too – I don’t do this, because it’s a lot of effort and the seeds don’t bother me.  I also leave the skin on for its nutritional benefit.  I added the tomatoes to the pot, with about a 1/4 cup  of tomato juice and a big pinch of salt. 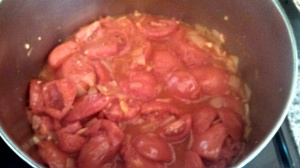 For best results, you want to simmer, stirring occasionally, until the tomatoes are quite broken down, as shown in the image below.  I added about another cup of tomato juice at this point – and I wish I’d had about a tablespoon of tomato paste. 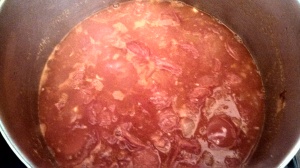 Once your tomatoes look like this, remove from heat and let the liquid cool off. While it was cooling, I chopped up some fresh basil and oregano and added them.  Once cool, I took out my immersion blender (one of my favorite kitchen tools), and blended until I had a nice texture.

Then I packed it up in a couple of quart-sized freezer bags (setting aside some for a spaghetti sauce this week) and popped them in the freezer… a nice comforting addition to a future winter meal!

Making pesto is a much shorter process.  I made one batch with pistachios and one with pine nuts, because pine nuts are more expensive than some other nuts, and I like the pistachio flavor.  I’ve also heard of people using walnuts as a replacement.

Take your basil, garlic, olive oil, your nut of choice, as well as a little salt and pepper, and process in a food processor (or blender, but I find the food processor much easier).

Ironically, about 6 months ago, my food processor wasn’t working.  Rather than look up the warranty right away, I lazily stuck it back in the cabinet intending to look for the warranty at some future time (which never came).  But this weekend, one of my biggest delights was when I pulled it out of the cabinet thinking, ‘what the heck… I really don’t want to use my blender, maybe it will work..” and it did!

The end results are below.  I was really pleased with both pestos and the flavor of the tomato sauce.

Are you doing any freezing or canning to make your garden’s bounty last through the winter?  Any other tips for making use of the things you already have?